My 18-month old son and I were visiting his dad at work. My son eyed the big bag of trail mix, with the brightly colored M&M’s with awe.

“Some?” he asked, pointing to the jar.

My husband grabbed a handful, carefully removing the peanuts from the mix and gave my son the raisins, dried cranberries and M&M’s.

They’d told us to wait. Wait to introduce nuts until age three, because it will allow their bodies to grow and be stronger, in case he possibly had to fight off any allergy. We thought we were waiting. He munched happily and we visited until it was time to go. As we were leaving, I noticed a small red bump on his chin. I asked my husband about it and he joked, that maybe he was starting puberty early and it was his first zit.

“Owie, Mommy, owie,” my son began to cry in the backseat on the way home.

“Owie!!!” he cried louder. It was dark, I was on the freeway and I couldn’t tell what was happening.

“What happened baby?” I asked.

“OWIE, MOMMY!” he shouted, his small legs kicking against nothing, as he tried to get rid of the pain.

I turned and could only see he was rubbing violently at his eyes. I pulled to the side of the freeway and turned on the dome light. I gasped in horror as I looked at a monster. My son’s face was swollen 3 times its normal size. His eyes, mere slits of red, were watery pain. Every part of his exposed skin was red and angry. He was trying to both rub at his eyes and scratch his arms and neck. He was sobbing. He was coughing.

Shaking, I called the pediatrician on-call. I was only a mile from the ER and began driving – no – speeding, towards their doors. I left a message for the Dr. on call and pulled into the loading ONLY zone in front of the ER. I grabbed my crying boy and ran in. I still didn’t realize what was happening.

“Help me!” I cried as I entered the doors. The nurse came up and looked at my son who thankfully, was beginning to calm down. She took me to the receiving room to get our information. She asked if he had eaten any new foods and it hit me; the trail mix was covered in peanut oil. The understanding that nut oils could cross contaminate, never crossed my mind. Since he was breathing ok, she told us to take a seat and they would call us right back. That’s when my phone rang. It was the pediatrician on-call. He said since it has been over 40 minutes since my son had eaten the mix and he was breathing ok, he wasn’t going to go into anaphylactic shock. I didn’t even know what anaphylactic shock was. He explained and said the best course of action was to get some Benadryl. He said that was what they would do in the ER but they‘d charge a heck of a lot more. I excused us from the ER and did as he said. My baby still looked swollen, his eyes raw, his skin red. But he was smiling and happy again. He was breathing, he was alive.

I gave him the Benadryl and spent the night awake, checking on him. It was the longest night of my life.

Tree nut allergy was the diagnosis we received, after taking him into the pediatrician and getting blood tests. He could die if he ate them. It was a huge shock but I am not grateful we were as lucky as we were.

That was 11 years ago and not a day goes by that we’re not aware of this allergy. Rarely can he eat packaged goods, never has he indulged in birthday cake at a party (I always take him his own “safe” treat). We don’t eat out much because he is aware and cautious. I cook, I do the baking and I make sure he is safe. Even foods/companies that have been safe in the past, might change manufacturers or processing procedures, so we always have to be diligent. We read packages, we visit websites. Epi Pens are always close by.

I’d give anything to have things different for him. To have him be able to enjoy cake at a party or get as excited as his brother does when the ice cream truck comes. I’d love to go to dinner and not have to ask, and ask again if they can ensure his food is safe. And still be scared, watching him for a reaction.

But, now there is hope. Hope that wasn’t available years ago, when he was first diagnosed. There have been huge, amazing advancements in the medical field, which now allow those who have spent years fearing cross contamination, the ability to finally breathe. Kids who have never dared even touch a peanut or tree but, can now consume MULTIPLE nuts each day thanks to Oral Immunotherapy (desensitization), skin patches and more. There’s HOPE!

I give thanks for Epi Pens. I am thankful companies are very aware of labeling products that could be harmful. I am grateful my son is so vigilant in ensuring he knows what he is eating and that he is careful. I am overjoyed at the trials and research happening to help. I am thankful we live in an age where there are dollars being invested in research. I am thankful for hope.

My son will be ok because of what we now know. Because we have options and the ability to be careful, to make alternative choices and have lifesaving medicine on hand. 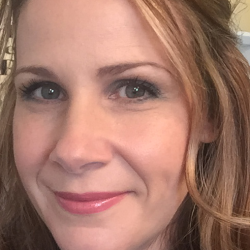 Heather LeRoss
Tipsy Tiaras at Author
I’m the woman who you would see in your neighborhood, walking her dog while wearing a tiara. I’m the woman who loves to raise a glass in honor of women everywhere, who are running in the race to perfection; a race I know I’ll never come close to finishing, let alone winning. I’m the woman who hides in her closet, away from the kids because sometimes, it’s just too much. I’m the woman who wears pajamas to school drop off, burns dinner at times, likes all things girly and will spend a bit too much on a new purse.